Winston has been sponsored by Darlene D. 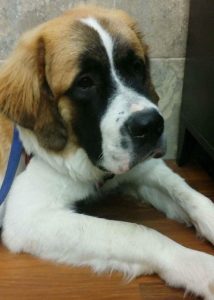 As of December 1, 2017 – Winston is still a very fearful boy. I am not sure if this will ever change for him. He has made a connection with one person in the household and does well with her. He tolerates the rest of us as long as we move slowly and don’t try to go near him. He is still extremely fearful of new people and situations. He is an extreme flight risk as his coping skill in any situation is to escape.
He has learned the ‘sit’ command and “down”.
Housetraining is our biggest challenge. We are trained to let him out often  but if we are not vigilant as all times he will still pee anywhere in the house.
He must be watched unless he is crated. He has also started to gather shoes and hats to chew on in his bed. He is being crated at night. He howls and whines for awhile but we are seeing progression with him settled a  bit faster.
Winston will not be able to go to a home with children as he is too fearful and that makes him unpredictable. We have also noticed that he has a prey drive so, even though he is good with our cat, dogs and kids, if they run when playing he chases them and jumps on them. It is just play but it could be very dangerous if he is placed in the wrong home.
*****
This young guy is a prime example of why you should research the breed of dog you want. He’s been passed around a fair amount in his short 7 months of life. Growing bigger and bigger and never knowing what “home” is. He has not been taught any commands to help him listen. He is not housetrained. He has been set up for failure and when he makes mistakes he gets shoved out the door again. This cycle stops here. Winston is safe in his foster home and will stay there until he learns behaviours that will help him fit into a home. It is a long, difficult road because we need to get him to trust us first before we can start teaching  him his basic commands. By the end of each day we feel we have reached a new level of trust with him and when he wakes up the next day it is gone and we have to start all over again.
He is shy, timid and unsure. Currently, that means that he will growl if he feels he is not safe. I do not see aggressive behaviour but we will continue to monitor this For now, he’ll be in our rehab program as we work to encourage him to be more confident.
He’s a beautiful boy who is great with other dogs but due to his size and playfulness, it would not be appropriate to put him in  a house with small dogs. He does not know how large he is and when he plays he goes full tilt. He has met the cat and did fine with that but our cat is dog savvy and knows to get out the way when Winston comes barreling at her to play.
Winston will not be placed in a home with children. Even as he learns obedience and all his new skills, I believe he has been mistreated once too often in his life and that will always be in the back of his mind. He is 75lbs at 7mths so he will be extra large. Putting him in a home with small children would just not be reasonable.
He’ll be looking for a home that understands what it takes to own a large breed dog and can continue his training. He currently has high energy and will need an adopter that will be able to exercise him. This is not easy because he is very afraid when he is out in public. He needs an owner to help his confidence grow but  also help burn off all that puppy energy in an environment where he feel safe enough to play.  He needs to be more than a cute face, he needs to be a family member.
For more info, you can contact his foster mom Angela at kingtwins8@aol.com
Please note that while we continue to get to know each of our dogs, their biographies will be updated with additional information, so make sure to check back once in a while