Shadow has been adopted.

Meet Shadow! This adorable 7 year old toy Pomeranian is an absolute joy to be around. He is extremely affectionate, adores his people and has a wonderful smile! Shadow has a great appetite, is not picky with food and is house-broken. Shadow can be crated for long periods of time and will not have any accidents in his crate as he understands it is his safe place to keep clean

. It is clear to his foster mom that at one point in his life Shadow was a very cherished member of his home. (Much like he is in foster care!)

Shadow is currently living with two other (standard sized) pomeranians and numerous cats. He has done very well with playing with the more active

and playful of his canine brothers, Rex (formerly Tigger, a Save

Me Rescue alum) and they can often be found sharing a bed, making out (hehe) and wrestling. With his other brother Buddy who needs more space, Shadow has picked up on this and does not seem to bother with him at all. That being said, if confronted in a grumbly manner, Shadow will not back down and while he isn’t aggressive in any way, he will stand up for himself.

With his feline siblings, Shadow is very much the same. Some of the cats in his foster home are very receptive to dogs and will also share a bed with him and snuggle when it’s time to go to sleep. With these cats, Shadow is fabulous! They will often sniff each other’s faces and bums, and he will not chase them.

However, one of the cats in the home can be known to swipe or paw at new dogs who enter, and Shadow again will stand up for himself. He will not harm or injure the cats in any way, but if swatted at will huff and puff (bark a tiny bark) and insight a very minor chase until the cat runs up onto some furniture. Shadow then does not seek the cat out, but happily returns to whatever it is that he was doing, feeling as though he did a job

Though Shadow is very little, he can jump onto the couches or bed on his own and boy does he love to! Shadow is a regular acrobat, and would be an excellent show dog! He loves to climb and can often be found sitting on furniture when left unattended. Because he is so lightweight, he does not damage any furniture, but his foster mom thinks he just likes to feel tall!

Shadow does very well in the car, choosing his passengers lap though he does like to explore, so a seat belt clipped to his harness would be a great idea for long car rides. He does very well on a leash and does not mind being carried. Shadow however, absolutely will bolt if a door is opened even for a split second. He is a regular escape artist! For this reason, if his adopter is to open the door for any reason such as to get the mail or greet someone, it is best that Shadow be tied to his leash beforehand or put in a crate as he is considered a definite flight risk.

If he could, Shadow would spend his entire day snuggling with his humans on the couch! At night, Shadow seeks comfort and will often sleep on one of the few dog beds spread out throughout the home. On occasion, his foster mom has fallen asleep with Shadow on her own bed while watching

a film and he slept all the way through until morning without making a peep.

Shadow is a true creature of comfort, will often seek out the most cozy place in the home and would do well in a home where he can spend his days snuggled up by a fireplace, reading a book and snacking on a cookie. He is the king of kisses, and will kiss just about any stranger he meets ever so delicately on their nose. (He also likes to a hump a leg or two, but we just call it being friendly!) He loves his walks but should be monitored in the yard as he is quite small and curious!

Though Shadow is great with children and would love the companionship of basically anyone willing to give it to him, because he is considered a flight risk, it is our concern that he may bolt out of the front door should a child not be paying attention. It is for this reason, that we do not recommend

him in a home with children.

Shadows foster family is completely smitten with the little man, however are willing to give him a chance to move forward so that they may save

the lives of other dogs in need. Because Shadow is 7 years old, his adoption fee is $400.00, however any amount

surpassing this amount will be gladly accepted.

here to see a video

of Shadow! (He is the second dog in the video.)

Please note that while we continue

to get to know each of our dogs, their biographies will be updated with additional information, so make sure to check back once in a while! 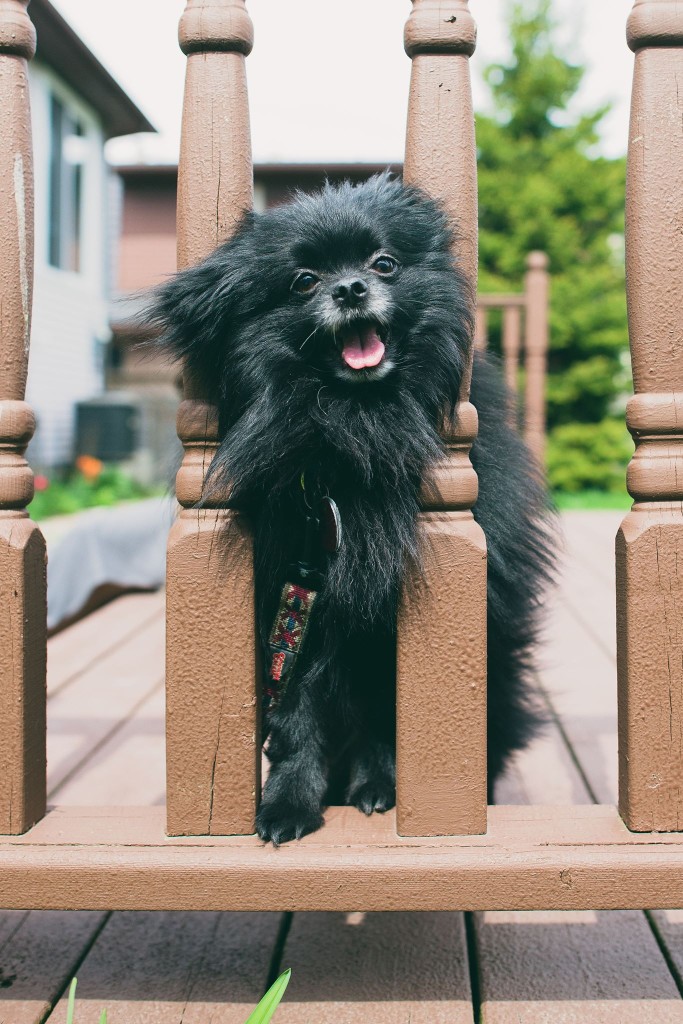