Save Me remembers Charlie

Sponsored by Meaghan A., in loving memory of her friend Chris’ sweet senior dog Josie 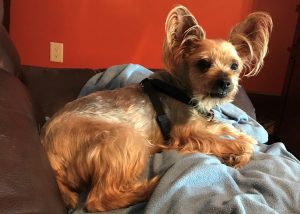 Charlie came into our rescue when his family could no longer care for him.  He was one of the most lovable, sweet little dogs we’ve had the pleasure to foster.  Unfortunately, Charlie had several strikes against him. He was fighting diabetes and Cushings disease which are challenging to regulate at the best of times.  He’s had many good days, interspersed with bad days where he would not eat, and therefore his insulin could not be administered. He always rallied fairly quickly and was stabilized with intensive TLC and vet recommendations.  He always sat perfectly still like a little soldier for his needles. But on April 15th, 2018, Charlie stopped eating. This time he didn’t snap back, but was a very sick boy, unable even to keep water down. He was admitted to our vet clinic where he was placed on intravenous fluids.  A blood test revealed that he was suffering from an attack of acute pancreatitis. His poor little body was now being ravaged by 3 horrific diseases and his liver began shutting down. His prognosis was extremely poor and, as difficult as it was, with heavy hearts it was decided in consultation with the vet, Save Me and the foster home that the kindest thing we could do for Charlie was to end his suffering, so he was humanely euthanized on April 17, 2018 in the arms of his foster mom.  Needless to say, our hearts were broken for this sweet and lovable boy who loved cuddling with his foster dad every day for the past three months.

Charlie was lovingly fostered by Keith and Carol