Blitzen has been adopted! 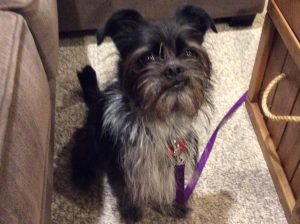 Update: Blitzen would make a great apartment or townhouse dog as long as his people would be willing to take him out on a leash several times a day to do his business. At his foster home he has a fenced yard but he prefers to be out on his leash with his people. Blitzen would prefer to be with someone who doesn’t mind sharing their bed – He is quite a snuggler!

Blitzen is a gentle soul who loves to snuggle and is quite happy to snooze somewhere comfy until he hears the magic word “walk”. He is quite calm and quiet for the most part but will bark enthusiastically to let you know if something interesting is happening outside or if someone comes to the door. He prefers to be outside with his people rather than on his own. Check Blitzen out in action here and here!

He gets along very well with the 2 other dogs at his foster home and completely ignores the cats. He loves people but likes to approach strangers on his own terms. Once he gets to know someone he is very affectionate. He loves the teenage girls at his foster home but would do best in a home without young children as he does not like to be startled and may nip if he is scared.

Blitzen knows some basic commands and can “roll over” with style! He walks well on a leash and is completely house trained. This little guy has an extremely expressive face, a great hairdo and an all around nice personality!